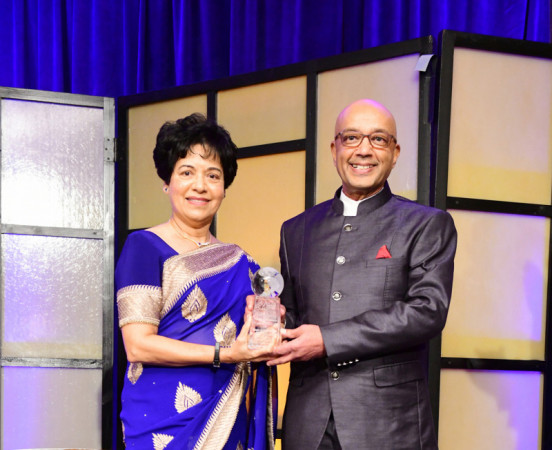 The Asia Society Texas Center has honored Dr Marie and Vijay Goradia with the Huffington Award at The Houstonian in Houston, TX.
A discussion with the Goradias followed at the event about their life stories and their commitment to advancing educational and healthcare issues around the world. Both were raised in humble circumstances in India and came to the US in the 1970s.

Soon after emigrating, Vijay founded Vinmar International, a global petrochemical trading and marketing company which recently tallied over $4 billion in annual revenue. While back in India on a business trip in 1999, he was inspired by the educational interventions he saw being implemented by a charity called Pratham, and he founded Pratham USA, which supports the work being done in India for underprivileged children.

Marie, who earned advanced degrees in biochemistry and molecular biology from Bombay University, journeyed to the US to do scientific research. Her current portfolio is wide-ranging, including becoming a distinguished toastmaster, ballroom dancer, and an active community volunteer.

The Huffington Award recognizes leaders who have been a major force on the international stage. Named for the Houston oilman and former ambassador who played a leading role in cre-ating Asia Society Texas Center, the Roy M. Huffington Award is the highest honor bestowed by the Texas Center.